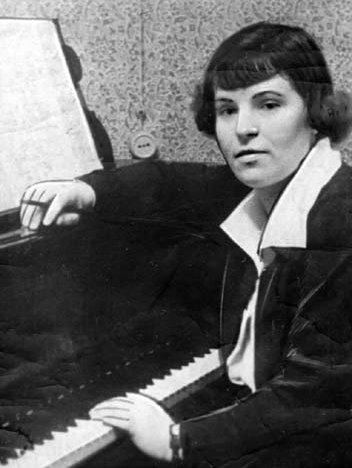 When the Russian composer Galina Ustvolskaya died in 2006 at the age of 87, I read her obituaries without knowing her music. There were scant facts; she studied with Shostakovich during the Second World War and she was a life-long resident of St Petersburg. She lived a reclusive life, teaching only ‘to feed myself’. She wrote patriotic music with titles like ‘Dawn over the Fatherland’ and ‘Young Pioneers’ during the Stalinist years before vehemently rejecting these works which were applauded by the Soviet regime. In culling her output, she left a catalogue of just 25 pieces of music composed from the mid 1940s onwards and largely unknown outside the Soviet Union until the state’s collapse in 1991.

At the time, I could find no recordings of her music in the Guildhall library and I had no access to music streaming on my phone and so her name slipped from my mind. But last weekend, I rehearsed Ustovolskaya for the first time with Pixels Ensemble and started to discover her extraordinary music as a performer.

The piece we are playing is the Clarinet Trio (1949) which you can hear in our concert on 31st July at the Granary. I recognised some of the vocabulary of the obituaries. There are aggressive, repetitive motifs, but in this trio, they are also melodic. There is simplicity of texture and rhythm, percussive patterns, tonal harmony set against dissonances. There are introspective yet tuneful solos with sparse bass lines. Sometimes the music seems paralysed by its own hypnotic stasis. Then it unexpectedly strides forward with a pounding momentum, so insistent that you daren’t take a breath for fear of stalling the thrilling pulse. The most famous of Ustvolskaya’s melodies can be heard in the 3rd movement, first introduced by the clarinet. It is so striking that Shostakovich used it in his 5th string quartet.

Ustvolskaya asks a lot of her material; she can work an idea until you sense a peculiar feeling of the music turning itself inside out. There are many instances where a single note must carry the weight of a thought, a texture and a gesture. ‘Her sounds become hard objects in space’ writes Alex Ross... ‘Ustvolskaya has made music into sculpture.’

But Ustvolskaya’s music is far from being sculpturally cold and lifeless, nor is it objective. It fizzles and crackles with tension, energy and unease, as if suppressing something beneath the surface. Curiously, when we played the Trio, it didn’t feel quite like chamber music because so many of the conventions of chamber music appear to be missing from her musical language. It felt wrong to be asking the usual rehearsal questions like ‘how shall we phrase this?’ and ‘what sound shall we find here’? It felt as if we should be asking a different set of questions.

After the rehearsal, I read that Ustovolskaya was adamant that none of her works were ‘chamber’ in the conventional sense of the word and that all her chamber works were implicitly orchestral in scale. That made sense. Though it’s worth noting that her 5 ‘symphonies’ are also not conventionally symphonic or ‘orchestral in scale’ either. Three of them include narrators and all are single movements. Symphony No 4 (Prayer) is for mezzo-soprano, trumpet, tam-tam and piano and lasts 10 minutes. Nothing is straightforward or predictable in Ustvolskaya’s music. For ‘Composition Number 2’, she created a percussion instrument to perform alongside eight double basses and piano. It was a 34cm square cube made of chipboard struck with two mallets. She knew exactly the sort of muffled sound she wanted; a dead, claustrophobic beat that makes you want to take deep breaths and look towards the light. As I listened to more of her music, I was still haunted by the idea of a ‘ghost layer’ under the surface which I could not put my finger on. Was she writing ‘around’ something? What was under the notes?

Ustvolskaya’s music is inseparable from the time in which she wrote it. But not because she sought to depict or represent the atrocities of 20th century politics and warfare that surrounded her life. She needed a remedy for the horror and suffering and she needed to escape from a political situation that stunted her creativity and musical freedom. Her solution was to cut herself off. From 1961, she attempted to escape all cultural influences by removing herself from the St Petersburg musical community, refusing to attend concerts or accept commissions, choosing not to read and living a hermetic, isolated existence. In her excellent thesis on Ustvolskaya, Rachel Jeremiah Foulds says; ‘to argue that Ustvolskaya was untroubled in her life is to misunderstand the point, but Ustvolskaya was not troubled by her solitary existence: quite the reverse….Ustvolskaya opted for a solitary life as a sanctuary from her life of suffering’. In this way, Ustvolskaya could continue composing in exceptional and extraordinary circumstances and form her distinctive voice. ‘The best thing is loneliness’ she said, ‘because in loneliness I find myself, and through this I can actually live.’

Is it truly possible to forsake all cultural influences? Ustvolskaya rejected any comparisons to other composers (‘It is better not to write anything about my music than to write about superficial impressions’). She was obsessively focussed on the new (‘I don't believe those who write 100, 200, or 300 works, including Shostakovich. It's impossible in such an ocean of works, to say anything new!’) Foulds suggests that Ustvolskaya ‘found her answer in the combination of tradition and revolution by remembering the past in order to ascertain identity in the present’. Perhaps her musical language is so complete that there is a void or a series of ‘air pockets’ beneath the music where one usually locates and recognises ‘the past’ (cultural influences, other composers, history…) Maybe the ‘ghost layer’ in Ustvolskaya's music is precisely this - the shock of what is missing. When I think about this as I play her music, it feels as if I can reach into a harrowing shape or a space where something has been forcibly removed, wrenched from its roots. Whilst her achievement is impressive, it also feels heartbreakingly tragic.

An artist who was never attracted by external success, the only thing that interested Ustvolskaya was her own music. ‘I live in the twentieth century' she said, 'when there are thousands of influences all around me ... I give all my strength, begging God for help in my creative work; I have my creativity, my music, only mine’. Yet Ustvolskaya’s music is not a selfish one. In the Clarinet Trio, there are passages that are benevolent and beautiful to play and to listen to. And there is the thrilling physicality of the pounding, the aggression and the dissonance, symphonic in scale, like a ritual that summons everyone to join in. Its almost impossible not to be part of the sheer theatricality of what you are experiencing. Ustvolakaya is a unique, visceral voice of the twentieth century and once heard, her music is unforgettable.

1. The Ustvolskaya website has a wealth of information, interviews and a fascinating gallery of pictures

2. 'Scream into Space' (2005 directed by Joseé Voormans) - a short documentary' made the year before Ustvolskaya died contains insights, performances and commentary from Ustvolskaya herself and those who knew her best and championed her music.